Kitchen Garden with a Willow Fence ……and thought at one point I could in fact make one myself. However Tim who sometimes gardens at Uccello Lane (and many other things as well) not only could make one BUT knew where to get the willow – so the willow fence with a small gate was built.

Outside the kitchen is fairly dark due to some magnolias and trees from next door so we had to be careful about what we planted – and eventually went to pots that could be moved into the sun. In some small raised wooden beds we put in spring onions and basil. Fennel went wild along with ornamental kale and rocket! The citronella, chamomile and parsley went well. The rhubarb struggled a bit so we replanted it up the back where the kangaroos ate it! 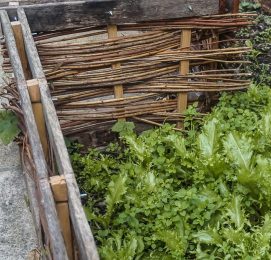 Willow Fence on the Kitchen Garden Spring Onions in the Kitchen Garden

Ornamental Kale in the Kitchen Garden 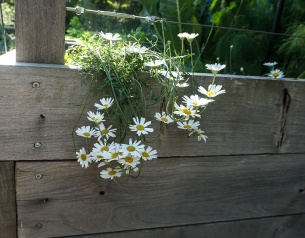