Wisteria Colonnade – it’s done and it is spectacular! We had a wisteria that had been neglected on the back fence, but as you know that does not stop wisteria – in fact they thrive on neglect but it did not seem to flower!
It has been a couple of years in the making but yes the Wisteria Colonnade is now complete. It fits into the garden in scale and provides the feature against the back boundary where 5 Scarlet ash grow.
Mary-Lou’s tiles on the floor are perfect and sitting on the seat looking down over the garden is peaceful and rewarding in the early morning.
The Secret Garden can be seen peeping through the Wisteria and is linked by a pathway that rambles down.
Before
So once we had the birch forest we clearly had to have one of Edna Walling’s favorite features – a Colonnade. Edna Walling loved to put in colonnades and the wisteria is an obvious choice as they are so vigorous and when in flower provide a beautiful show. After discussions and pictures, Scott Brown said “yes, he would give it a crack – sort of like a fancy pergola”. So he built it – and then he fine tuned it, added more wire, draped the wisteria over it and guess what – Yes it was a Wisteria Colonnade!

Wisteria Colonnade – To the left more…. Wisteria looking up from the Secret Garden Wisteria Colonnade – getting ready for winter 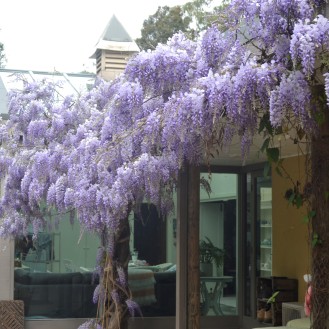 Wisteria out the back in bloom and bees! 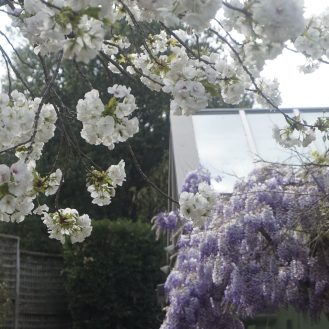 “The Bank” – Wisteria and Cherry Blossom

One Comment on “Wisteria Colonnade – it’s done and it is spectacular!”